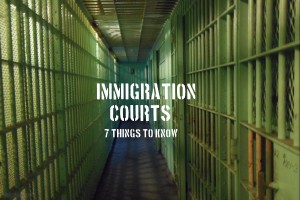 Since many people are not familiar with how the immigration courts operate, we have tried to explain at least few things how the court works especially for those at UNNJ who might have to deal with the courts.

3. Master Calendar Hearing
At this hearing the judge will take the plea of the respondent and the respondent should be represented by an attorney. Note that the government does not provide free attorneys although some attorneys do volunteer for such cases for one hearing. The judge will also set the calendar for an individual hearing on this date. Note that often the parties either the respondent (immigrant individual) or the government might request for continuance which means postponing the case for a later stage. Note that sometimes it is not a good strategy to postpone. Note that the individual might request for voluntary departure (if available) at this stage.

4. Individual Hearing
This is the actual hearing where the government will present their case and respondent will defend and in turn present their side of the story depending on the relief(s). Individual hearings can actually be long and sometimes go over few days and even months. Unfortunately recently due to an overwhelming demand on the immigration courts and shortage of judges, the courts have been putting cases up to three to five years from the Master Calendar hearing for an Individual hearing in some States.

5. Immigration Judges are Article I judges.
Immigration judge are not like other regular courts and are Article I judges, federal administrative law judges (ALJs), which means they are not like independent judiciary judges. Unlike other judges, they are inquisitive and can actually ask questions about the case although the government will be the one mostly asking the questions. As such they do not follow the same rules as other judges.

The above is written just to give a little insight of what happens when a case is passed to court. There are many other things which can be done to either keep a case in court or remove it from court. However, it is important that you have a good lawyer by your side who not only understands immigration law but also the court procedures. Often times people try to cut corners and end up in worse situations than they are right now. As such we recommend patience and understanding when it comes to immigration court process.