February 6, 2013 – BALCA upheld the Certifying Officer’s (CO’s) denial, rejecting the 3-to-1 argument and finding that one year of experience (with or without a degree) equals one year for SVP purposes, and a bachelor’s degree equals two years for SVP purposes. (Matter of Telcordia Technologies, 2/6/13)

July 30, 2012 – Noting that the Washington Post is a major U.S. paper, BALCA held that though the Examiner might have a wide circulation, the employer failed to show it was the most appropriate for the job opportunity. (Matter of Intercontinental Enterprises, 7/30/12)

July 16, 2012 – Citing pre-PERM case law, BALCA found that where there is no finding that the job requirements are unduly restrictive, the employer may reject job applicants who do not meet the minimum requirements without interview. (Matter of JP Morgan Chase & Co., 7/16/12)

May 18, 2012 – BALCA held that the placing of a third advertisement in a single newspaper may satisfy the PERM recruitment requirements if the newspaper meets the criteria of both a local newspaper and a newspaper of general circulation. (Matter of Symrise, 5/18/12)

May 7 2012 – Referencing pre-PERM case law, BALCA reversed the denial where the alien was the brother of the owner of the sponsoring employer, but had no ownership interest in the company. (Matter of MMB Stucco, 5/7/12) 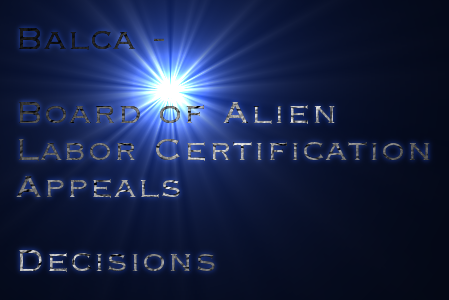 Download our FREE Apps for Updates on your mobile.