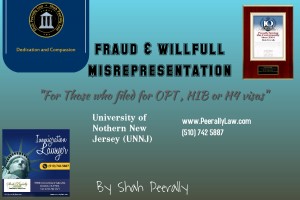 April 8 2016 – Some of the students of the University of Northern New Jersey (UNNJ) who applied for an OPT or an H1B visa, have been receiving a number of requests for evidence (RFEs) based on their physical and actual attendance of UNNJ classes including but not limited to transcripts, parking space receipts, attendance records, etc. Since UNNJ was not a real school per se, many of those records were wrongfully obtained either through the brokers or the school administrations. As such bogus parking space receipts, false attendance records and false transcripts were provided to students to prove their RFEs. Such documents were actually mentioned in the complaints of the Department of Justice against some of the agents/brokers in making their complaints. As such those who have actually answered the RFEs and have knowingly participated in the scheme of getting the required RFE documents will be facing some huge difficulties in their arguments that they were only victims of UNNJ. However, note that many have actually not used any of such documents knowing that they were fraudulent. We need to wait and see now how USCIS is going to treat the benefits which have already been given to the students who applied for the OPTs or H1B visas. For the OPTs based on UNNJ, it seems they have not been issued any of them. But for those who filed for an H1B/or H4 visa and have been granted an H1B/or H4 visa, there might be some sort of revocation instigated. If you are facing this issue, call us immediately at 510 742 5887.

Below are some of the controlling rules and cases laws related to willful misrepresentation and fraud.

An applicant may be found inadmissible if he or she obtains ​a​ ​benefit​ under the INA either through: ​
•Fraud​;​ or​
​•Willful misrepresentation.​

Inadmissibility based on willful misrepresentation requires a finding that ​a person​ willfully misrepresented a material fact.​ See INA 212(a)(6)(C)(i). For a definition of materiality, see Chapter 3, Adjudicating Inadmissibility, Section E, Materiality [8 USCIS-PM J.3(E)]. For ​a person​ to be inadmissible, the officer must find all of the following elements: ​

​•The ​person​ ​procured,​ or sought to procure, a benefit​ under ​U.S.​ immigration laws;​

•The false representation was ​willfully ​made; ​

•The false representation was ​material;​ and​

​If all of the above elements are present, then the ​person​ is inadmissible for willful misrepresentation. ​

​If the person​ succeeded in obtaining the benef​it under the INA, he or she​ would be inadmissible for having procured the benefit by ​willful​ misrepresentation. If the attempt was not successful​,​ for example, the misrepresentation was detected and the benefit was denied. ​the ​person​ would still be inadmissible for having “sought to procure” the ​immigration benefit​ by ​willful​ misrepresentation. In each case, evidence of intent to deceive is ​not​ required.​ See Matter of Kai Hing Hui, 15 I&N Dec. 288, 289-90 (BIA 1975).

​Inadmissibility based on fraud requires a finding that ​a person​ knowingly made a false representation of a material fact with the intent to deceive the other party.​ See Matter of Tijam, 22 I&N Dec. 408, 424 (BIA 1998).
​For ​a person​ to be inadmissible for having procured entry, a visa, other documentation, or any other benefit ​under the INA​ by fra​ud, the officer ​must find all of the following elements: ​
​
•The ​person​ ​procured,​ or sought to procure, a benefit under ​U.S.​ immigration laws;​

​•The ​person​ ​made​ a ​false representation;​

​•The false representation was ​willfully ​made; ​

​•The false representation was ​material;​ ​

If the​ ​person​ was ​un​successful in obtaining the benefit​,​ For example, the fraud was detected and the benefit was denied. he or she may still be inadmissible for having “sought to procure” the ​immigration​ benefit by fraud. In this case, the fraud element requiring the ​U.S. ​government official to believe and act upon the false representation is not applicable; however, intent to deceive is still a required element. ​

​In cases of attempted fraud, it may be difficult to establish the ​person​’s intent to deceive because the fraud has not actually succeeded. However, establishing intent to deceive may be ​un​necessary; if evidence supports a finding of willful misrepresentation, which does not require intent to deceive,​ See Matter of Kai Hing Hui, 15 I&N Dec. 288, 289-90 (BIA 1975). then the ​person​ is already considered inadmissible without any further determination of fraud. ​