The USCIS has now come up with the final rule on the I-601A provisional waiver for undocumented immigrants with unlawful presence in the US. On the 6th of January 2012, the USCIS reiterated the Barack Obama Government’s commitment towards administrative efficiency and increasing family ties by announcing the intent of a proposal that would help bring about a regulatory change in reducing the amount of time that is taken for an illegal migrant who has applied for a green card to become a permanent citizen. The news announced on the USCIS blog was passed and USCIS will start accepting application on such waivers as from March 4, 2013.  This will bring about much needed relief for U.S. citizens who are often separated from their families when an illegal migrant (family member) applies for citizenship. The final rule in fact is better than the proposed rule.  You can read more about the final rule on UPDATES on provisional waiver here.

The proposed rule were as follows and the article below was written before the final rule.

Why this proposal is so welcome

One of the reasons why this proposal by the USCIS is so welcomed is because since 1996, when the “Illegal Immigration Reform and Immigrant Responsibility Act” was passed by the Congress and signed by President Clinton, it has become extremely difficult for those residing illegally in the US to apply for green card. The reason for this being, that the law was bent on punishing persons who were “unlawfully present” in the U.S.

With this proposal, the administration hopes to offer a waiver to thousands of immigrants who are now living illegally in the US. They hope that this will help them in coming out of hiding and apply for green card.

What the situation is now

Under the present immigration laws, a US citizen with an illegal migrant as spouse, if forced to stay away from their family, in the event of the Illegal immigrant applying for a green card. There are thousands of families in the US with a similar situation where, one of either the husband or the wife is an illegal migrant. Under the present Immigration policies, a spouse who applies for green card in the US has to first leave the country (U.S.) and travel abroad so that they can apply for a green card. At times, these people are forced to remain separated from their families for a long period, beginning from anything between a few months to over 10 years. As a result of these restrictions, many families are lonely, leading to many people who hide their immigrant status and do not seek legitimate citizenship.

Here s an example of how things go, under the present laws-

Kuldip Singh and his wife Sitara, stay in the US. Sitara is a naturalized citizen, but her husband Kuldip is not. They have been staying in such a situation for the past six years. The question here is why is Kuldip not granted an easy citizenship through marriage? If Kuldip were to apply for a green card he would have to return to India and probably not be allowed to return from there for the next ten years, till which time the green card is being processed.

He would probably be allowed to apply for a ‘waiver’ from this time period, but he can do this, only under the condition that he can show that his wife Sitara is suffering ‘extreme hardship’ in his absence. While this is a rather difficult task to establish, since the laws do not take into account the hardship of the illegal immigrant or even his children. The law only takes into account the case of Sitara.

The chances of the ‘waiver’ being denied to Kuldip are very high at that, because that is how it usually is. Of course, Kuldip has the right to appeal, but that in itself will cover a time period of 2 years. During all this time of uncertainty, Kuldip must remain outside the US, making situations for the family worse both emotionally and monetarily, in case of he being the sole bread earner for the family.

Because of this strange law, thousands of families in the US, who are otherwise law abiding folks have been separated for years from their families. Many have had to go on welfare and their homes foreclosed. This leads to a situation where most U.S. spouses choose not to sponsor their foreign-born spouses, simply because of these problems. These spouses remain in the U.S. as illegal immigrants.

Curiously, the same harsh penalties, does not seem to be applicable to the spouses of U.S. citizens who come to the U.S. from Europe. It has been seen that in some of these cases the spouses enter the U.S. lawfully as students or travelers and conveniently overstay their visas, while remaining in the country illegally for a long time before they are actually married to the U.S. citizen. And yet, in such cases, the law has permitted them to apply for a green card without leaving the country or even obtaining a waiver.

What will happen if the proposal is passed?

It should be noted that the proposal does nothing in the new proposal will to suggest changes in the law itself; it only recommends that the case of the green card appointment taking place outside the U.S., can now be changed to the spouse submitting the ‘waiver’ application from the US only, implying that the family can remain intact while the processing for the ‘waiver’ is being done.

Conditions under which the Waiver is applicable-

I came to USA in 2007 with my two kids. My husbands visa was denied, and was told to apply for I-601 Application for Waiver of Ground of Inadmissibility , based on a crime. I didn’t know what to do and where to go for help. I read an advertisement of Mr. Shah in one of the news paper. I contact Mr. Shah and he help me with my husbands wavier case.

Being new in this country and meeting a person (lawyer) like Mr. Shah helped me a lot. Their was hope that my husband will be here soon. The wavier case was very important to me because my family was separated. I thank Mr. Shah, Meera and Sony for being there for us. They were always there to assist me. Whenever we had questions and concerns. We would not have been able to undertake this or deal without his help and presence. I am very happy with the result, specially my children. they are looking forward to meet their father. Thank you Mr. Shah for helping my family and understanding our financial situation. Apart from your outstanding work, you are a very good person.

Please find other Articles on US Immigration 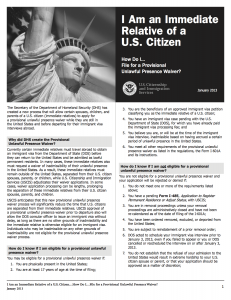