According to an article by Politico, it seems that under the rules of “extreme vetting”, USCIS will be conducting an interview on adjustment of status for those applying for permanent residence based on employment (EB).

Immigration authorities will require an in-person interview for certain applicants for green cards, a change likely to slow the process of obtaining one.

The new requirement, which was confirmed Friday by a spokesman for the U.S. Citizenship and Immigration Services, will apply to anyone moving from an employment-based visa to lawful permanent residency. Visa holders who are family members of refugees or people who receive asylum will also be required to undergo an in-person interview when they apply for provisional status, a stage that precedes receiving a green card, according to USCIS…. 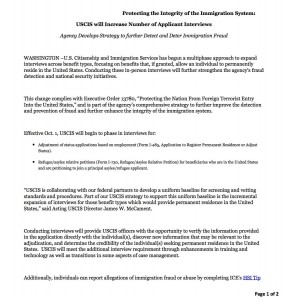