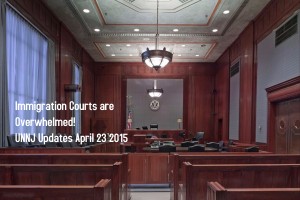 Many of the UNNJ students have been issued an Notice of Intent to Appear (NTA) which obviously will put a burden not only on the students but also on the immigration court systems. According to an article from the organization American Immigration Council – Immigration Court Backlog Shows No Sign of Shrinking, the immigration courts are over-loaded with work and many of the cases which are being referred to the court are non-serious criminals cases.  Since the Department of Homeland Security (DHS),  is mostly not charging students of very serious charges, we call on them to consider allowing the students to leave voluntarily without having to use voluntary departure.  This means the ICE agents can actually work with the students and their lawyers to process the cases and allow them to leave.

Indeed once an NTA is issued, judges in immigration courts are so backlogged that some of the UNNJ students will have to have to wait for months in order to be able to appear in court even for voluntary departure. This not only causes stress on the UNNJ students but also on the legal system.  Moreover, they are accruing unlawful presence which can hurt them in the future. Therefore for the sake of judicial economy and avoiding the cost on the US government as well as the students, we call on DHS to work with those who are willing to leave at the level of ICE investigation to allow them to leave freely.  Of course, the government will make sure that this is being done properly and on a case by case basis, but at least it will give the students a chance to leave and not be a burden  the US government.

By leaving freely, the UNNJ might actually have the ability to try for another visa to come back to the United States, provided the Department of State allows them to do so.  Of course, this is a secondary consideration once the students can actually return back to their home country. Right now the stress of waiting is not only hurting the students but ultimately the cost it is putting on the US government is not beneficial.

We urge the government to consider this option. Note that in some cases and states, the DHS has actually worked with the students to do exactly that, we hope it will continue for the sake of both the students and the US government.