The P visa is a temporary U.S. work visa, available to outstanding athletes (including minor leagues), athletic teams, and entertainment companies (including circuses) with a job offer from a U.S. employer. A P visa is also available for essential support personnel for one of the above categories with the same letter-number designations, and for spouses and dependents of P visa holders. The length of the P visa validity depends on the classification (i.e. P-1, P-2, P-3), as discussed below), though it may be extended in some circumstances. The P visa, though temporary, permits dual intent, meaning that the visa holder can come to the U.S. with the intent on immigrating permanently. There is no annual limit on the number of people who can receive P visas. 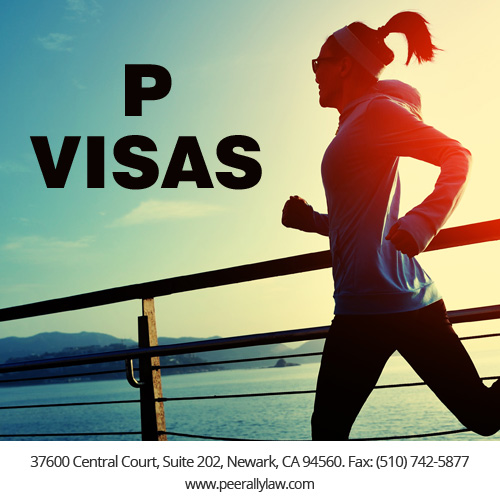 People who perform as an athlete, whether individually or as part of a group or team, and who (or whose team or group) is “internationally recognized”, or perform as part of a recognized entertainment group, may qualify for a P-1 Visa. P-1 visas may be granted for up to five years, and may be extended once up to five years. Upon completion of the ten year period, the P-1 holder may file a new petition, leave the U.S., and obtain an additional five year visa (but only after being in the U.S. with P-1 status for ten years). If, however, the visa is granted for a group (e.g., a team or performance group) the visa may not exceed one year.

In order to qualify for a P-1 athlete visa, the person or team must be “internationally recognized.” This means that the person or team has a high level of achievement, demonstrated by possessing skill and recognition significantly above the normal level for that activity, such that their achievement is recognized in more than one country as well known, outstanding, or leading in the activity. This must be demonstrated by showing a contract with such a team, league, or international event.

P-1 visas have been expanded to include: athletes, professional or amateur, who performs at an internationally recognized level; amateur athletes or coaches of sports teams that are part of a foreign league or association, if they are among the highest level of amateur performers in that country, are ineligible for U.S. scholarships under NCAA rules, and a significant number of the players in the league are drafted to major or minor league teams associated with the league; and professional or amateur ice skaters.

Additionally, athletes must show at least two of the following to qualify: proof of the applicant’s (or their team’s) previous involvement with a major U.S. sports league; proof of involvement in an international event through a national team; significant participation with a U.S. college team in intercollegiate competition; a written statement from an official of the sport detailing their international recognition; a written statement from recognized media attesting to the recognition; proof that the team or individual is internationally ranked within the sport; or proof that of a significant honor in the sport.

P visas are only available to entertainers that are part of performance group. The group, however, may be as small as two people. Further, if a solo artist traditionally performs with support, for instance backup singers or musicians, they may be considered a group if 75% of the group have been together for one year or longer. If the solo artist does not perform with such a group, the P visa is unavailable (though they may qualify for an O Visa).

P-2 visas are available to artists or entertainers, either individually or as part of a group, as well as essential support personnel, who come to the U.S. to perform under a reciprocal exchange program between the U.S. and one or more foreign organizations, which provides for the temporary exchange of artists, entertainers or groups. The applicant will need to prove the legitimacy of the program by presenting a formal, written exchange agreement. Additionally, a labor union in the U.S. must have either been involved in the negotiation of the exchange or have agreed to it.The U.S. individual or group being exchanged must have skills and terms of employment comparable to the person or group coming to the United States. The P-2 visa will be granted for the time necessary to complete the event, but may not exceed one year.

A P-3 category visa may be available to artists or entertainers, either individually or as part of a performance group, to perform, teach, or coach in a “culturally unique” program. The program may be commercial or noncommercial, and is not limited to traditional forms of art. It may be fusion or blend of more than one culture or region, however it must be unique. Further, the program does not require sponsorship by an educational, cultural, or government agency.The P-3 visa will be granted for the time necessary to complete the event, but may not exceed one year.

To qualify for the P-3 visa, the performer’s employer must submit a statement from a recognized expert discussing the authenticity of the unique art form and the performers skill and knowledge, or evidence that the performance is culturally unique, such as reviews or other publications.

In order to qualify for the corresponding P visa, the support personnel must submit a consultation with a labor organization, a statement attesting that they are essential to the production, including their experience with the principal P visa holder, and a copy of the contract (or summary if the contract is oral).

Dependents, that is, spouses and children of P visa holders may be granted a P-4 visa. The P-4 visa will be granted for the same duration as the spouse or parent. Such dependent visa holders, however, are not authorized to work in the U.S. unless they qualify to do so under a different category.

The P visa application process can be difficult to navigate. The required form I-129 and all supporting documents must be filed with the one year period prior to the intended performance or services. If you are interested in and believe you may qualify for a P visa, we can discuss your particular circumstances with you and ensure that you petition for the appropriate category of P visa, and file all the required supporting documents. For P-4 petitioners, we can discuss what other avenues to employment authorization may be available.