Most people only require a wedding band as evidence of their marriage. In fact, your average married couple doesn’t have to prove to others that they’re married. Attending their grand wedding is evidence enough that they are in fact married; in immigration, the complete opposite is true. For those individuals who are interested in filing a marriage petition for their spouse, there are many levels of evidence necessary to prove that the marriage is in fact real. The reason for all this required evidence is the fact that many people do choose to get married for the immigration benefits. America is a land of opportunity and some people feel as if the only way to access it is through illegal means. So naturally it’s important for the United States Citizenship and Immigration Services (USCIS) office to see that marriage petitions are indeed obtained through valid marriages. How do you prove a marriage? What kinds of evidence is USCIS looking for to describe a bona fide marriage? The evidence essentially is very much a timeline of the relationship. The strongest marriage petitions show the development of the couple, from the beginning to present time. USCIS want to see that you’re a strong unit that has a genuine relationship. There are essentially 5 levels of evidence for a marriage to be valid for USCIS. Levels 1-4 are the most essential, level 5 is more like extra credit. 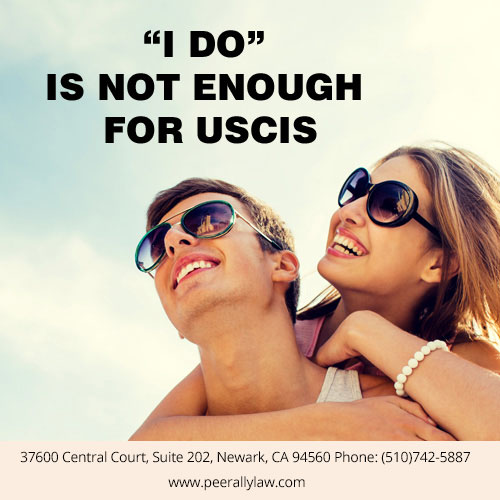 Level 1- Evidence of courtship: This is evidence that basically shows that the couple has been communicating to one another through different means during the period of their relationship. There are many modes of communication so providing any and all of them will greatly strengthen your case. USCIS wants to see that, like a typical couple, that courtship is present.

Level 2- Evidence of the wedding: This evidence basically displays that an actual wedding event took place. USCIS wants to see that the couple celebrated their marriage and had guests present to witness the celebration. This is natural for most couples who usually have a reception take place after the wedding ceremony to share their happiness with their closest and dearest family and friends.

Level 3- Evidence of Residence: USCIS wants to see that the married couple actually lives together because that is typical for the majority of married couples. After all marriage is about building a home and life together so sharing a place of residence is essential. Even after the petition is approved, an impromptu visit from USCIS to the home is very possible to make sure that the couple is in fact residing together.

Level 4- Evidence of Financial Distribution: There should also be evidence that the couple is sharing their finances. Essentially, it’s important to display that there is equal financial contribution to different bills for both individuals in the marriage. This is the norm for a couple who’s married; their expenses become shared expenses and for USCIS this is strong evidence that they are in fact a married couple.

Level 5- Evidence of Offspring: This is definitely not a requirement for USCIS. A couple that hasn’t been together for very long will most likely not have children together. However if the couple does have offspring together it’s important to show that the offspring are in fact the product of the two. This would be quite strong evidence that the marriage is in fact a bona fide marriage since they already have a family together.

These five levels of marriage are just some of the basic types of evidence to prove a strong relationship and consequently a valid marriage. There is always more you can add to further strengthen the case. However, it’s important to recall that if the spouse that’s being sponsored lives in the United States, then there will be an interview held. In this interview, the types of questions that USCIS will ask will be extremely personal ones that only a married couple would know. Individuals can therefore also choose to include evidence that also displays this same intimacy because it will provide greater support for the case. What a couple chooses to provide is ultimately up to them but these levels of evidence are a general guide that provides a strong case and therefore a higher success rate for the marriage petition to be approved. If you are interested in retaining the services of an immigration law firm that has dealt with many marriage petition cases successfully, please give us a call at Shah Peerally Law Group at 510-742-5887 or send us an email at [email protected].