Archived Visa Bulletins: Online versions of the Visa Bulletin are for informational purposes only and every effort has been made to ensure their accuracy. Any questions regarding a cut-off date for a specific month can often be confirmed by consulting an official copy of the Visa Bulletin, available upon request from the Visa Office.

The February 2014 Visa Bulletin is out and EB3 for All other countries movie to June 2012 while India still backlogged for both EB2 and EB3.
Family Based

The December 2013 shows no big move on family petitions but another huge retrogression for India.

Employment Based Petitions where India retrogresses to 2004

The November 2013 Visa Bulletin is out and we see no progress or retrogression on F2A compared to October 2013. No big changes on the EB categories either.

The Visa Bulletin October 2013 is out and we are seeing a small retrogression on F2A categories to September 2013 and EB2 India on June 2008 and EB3 for all other countries Chargeability is 2010.  Seems the trend continues to be good.

Finally a move for India EB 2 category to January 2008. We hope this trend will continue.

July 2013 Visa Bulletin EB Category. Again India is stuck to September 2004.  This is getting more and more stressful.

April 2013 is out and EB2 categories for India is not doing better.  This is a sad situation.

*Employment Third Preference Other Workers Category:  Section 203(e) of the Nicaraguan and Central American Relief Act (NACARA) passed by Congress in November 1997, as amended by Section 1(e) of Pub. L. 105-139, provides that once the Employment Third Preference Other Worker (EW) cut-off date has reached the priority date of the latest EW petition approved prior to November 19, 1997, the 10,000 EW numbers available for a fiscal year are to be reduced by up to 5,000 annually beginning in the following fiscal year.  This reduction is to be made for as long as necessary to offset adjustments under the NACARA program.  Since the EW cut-off date reached November 19, 1997 during Fiscal Year 2001, the reduction in the EW annual limit to 5,000 began in Fiscal Year 2002.

The Visa Bulletin is out again and the March 2013 does not show any improvement for Indian Nationals on EB2 while China mainland moves one month forward.  This is really disturbing.

What is the Visa Bulletin?

The Visa Bulletin is what actually controls the issuance of the permanent residence or green card number.  Despite, most of the time the cases for immigration are processed by the Department of Homeland Security (DHS), until and unless the State Department mentions a “visa” or number is available, the beneficiary will not obtain his or her permanent residence. This is based on a quota allocated as per country. There are few exceptions to this rule namely there are no waiting time for immediate relatives and certain other visas because there are no quota allocated.

Why Dates are Retrogressed or Some People have to wait for a long time to get their permanent residence (green) card?

Because there is a quota and because some countries have a situation of “over-application”,  the Department of State, borrows on the coming years.  For example, let us say for a certain visa, they allocate only 100,000 visas per year.  In this year (Year 1) they received 120,000 applications.  They will serve the 100,000 and wait for the other year to borrow 20,000 which will leave only 80,000 visas for Year 2.  Let us say in year two they get 150,000 applications, they will have to borrow 70,000 visa for Year 3.  And it goes on and on which ultimately creates a backlog on certain family visas and employment based visas.  For this reason a priority is assigned to each application for them to know their position in the line.  Unfortunately since the Department of State (DOS) cannot really predict the number of applications to be received by the DHS, the Visa Bulletin changes every month – sometimes moving forward and unfortunately too often moving backward.

How to read the visa bulletin chart?

The Visa Bulletin is not very complicated to understand if you understand which category you belong to.  However, the dates placed on the visa bulletin only gives the dates when a processing is current for a permanent residence to be issued.  If by the time your case is processed, the date are retrogressed (went backward), the government reserves the right not to issue the green card.  The Visa Bulletin date also does not reflect time the way we understand in general.  For example, you might see a category date is Dec 2010.  Most people would assume as per 2013, in 3 years, you will receive your greencard or permanent resident card.  But that is not true because:

1. The date may advance resulting in someone getting their permanent at an earlier stage; and

2. Dates often retrogress seeing one year for a movement of one month.  The EB3 categories and EB2 categories for India are good examples.

Therefore a prediction based on the Visa Bulletin is almost ‘a guessing game’.  You should always check the visa bulletin.  Our law firm will try its best to put the recent visa bulletin on this link. 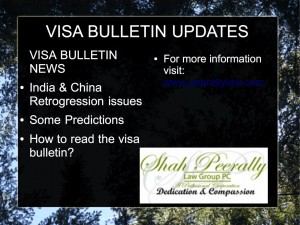 What are the Categories for Family Petitions?

First:  (F1) Unmarried Sons and Daughters of U.S. Citizens:  23,400 plus any numbers not required for fourth preference.

Second:  Spouses and Children, and Unmarried Sons and Daughters of Permanent Residents.

Residents:  114,200, plus the number (if any) by which the worldwide family preference level exceeds 226,000, plus any unused first preference numbers:

A. (F2A) Spouses and Children of Permanent Residents:  77% of the overall second preference limitation, of which 75% are exempt from the per-country limit;

B. (F2B) Unmarried Sons and Daughters (21 years of age or older) of Permanent Residents:  23% of the overall second preference limitation.

Explanation: This applies for children who are under 21 years old.  Note that the Child Status Protection Act might be helpful in such cases.

Third:  (F3) Married Sons and Daughters of U.S. Citizens:  23,400, plus any numbers not required by first and second preferences.

Fourth:  (F4) Brothers and Sisters of Adult U.S. Citizens:  65,000, plus any numbers not required by first three preferences.

5.  Section 203(b) of the INA prescribes preference classes for allotment of Employment-based immigrant visas as follows:

First:   Priority Workers:  28.6% of the worldwide employment-based preference level, plus any numbers not required for fourth and fifth preferences.

Explanation: EB1 categories are those categories which cater to people with extraordinary  abilities under EB1A, the EB1B for outstanding researchers & professors and EB1C Multinational Managers and Executives (usually people who also qualify for L1 ).

Second:  Members of the Professions Holding Advanced Degrees or Persons of Exceptional Ability:  28.6% of the worldwide employment-based preference level, plus any numbers not required by first preference.

Explanation: EB2 categories are those categories which help most of the engineers and people with a US Equivalent Bachelor Degree plus five years of progressive experience or US equivalent or US Masters Degree.

Third:  Skilled Workers, Professionals, and Other Workers:  28.6% of the worldwide level, plus any numbers not required by first and second preferences, not more than 10,000 of which to “*Other Workers”.

FAMILY BASED FOR FEBRUARY 2013

EMPLOYMENT BASED FOR FEBRUARY 2013